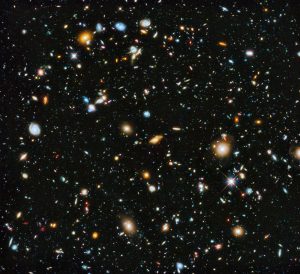 This view of nearly 10,000 galaxies is called the Hubble Ultra Deep Field. The snapshot includes galaxies of various ages, sizes, shapes, and colors.

I have been patiently waiting for the first pictures from the James Webb Space Telescope. On July 11th it felt like Christmas eve when I was a child. Only now it was the anticipation of receiving views from the heavens.

The first photograph, or at least the oldest surviving photograph, was taken in 1826 or 1827 by Joseph Nicéphore Niépce. So, in the grand scheme of things we have only had
the ability to photograph people and events for a minuscule amount of time, never truly knowing what countless individuals of history’s most famous people looked like.

Around the turn of the last century Henrietta Leavitt, one of a group of women “computers” at Harvard University who pored over photographic plates capturing the night sky. In studying photographs of the Magellanic Clouds, which we now know are two small galaxies that orbit the Milky Way, Leavitt noticed that certain stars varied in brightness over time, some of them in a peculiar way. “It is worthy of notice,” she wrote in 1908, that “the brighter variables have the longer periods.” In other words, brighter stars twinkled more slowly.

Around the same time, astronomer Harlow Shapley of Mount Wilson Observatory in California began to prove that the Milky Way itself was inconceivably vast. Shapley built on work by Henrietta Leavitt.

The Great Debate of “Were there other galaxies?” was resolved by a young astronomer named Edwin Hubble. He also used Leavitt’s Cepheid variable technique to measure cosmic distances, this time by finding the variable stars in the spiral nebulae themselves.

Not only do the incomprehensible distances of the cosmos amaze me, so does the rate we as humans are compounding knowledge. I am extremely happy that there are so many ways to explore and things are moving right along. Today we are seeing the universe in unprecedented detail. Tomorrow even more. The preliminary pictures are just the beginning. The possibilities are endless.

Today here and now. I enjoy my place in the universe knowing that I recognize that I am already whole, perfect and complete in essence and that I have the capacity to be whole, perfect and complete in manifestation regardless of what may be appearing as a relative condition. And it doesn’t matter how serious the condition is. There is no big or small in the Divine Mind, be it a planet or a peanut. It is as easy to create a castle as a button. It’s just a matter of whether I’m focused on a castle or a button. Thoughts become things.