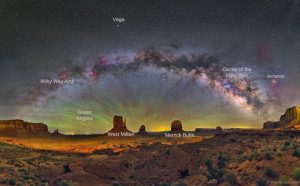 In a 1973 publication, The Cosmic Connection, Carl Sagan wrote, Our Sun is a second- or third-generation star. All of the rocky and metallic material we stand on, the iron in our blood, the calcium in our teeth, the carbon in our genes were produced billions of years ago in the interior of a red giant star. We are made of star-stuff.

He wasn’t the first to say it. That honor probably goes to a Greensboro, North Carolina newspaper columnist, Ellen Frizell Wyckoff in 1913, though she wasn’t quite brazen enough to claim that special status for humanity, only for the earth, when she wrote, The spectroscope analyzes the light if you please, and shows what it is made of. What was the surprise of the tireless searchers when they found common earth metals burning in the mighty sun!

There was once a little girl who cried out with joy when she realized for one little moment that the earth is truly a heavenly body, and that no matter what is happening to us we are really living right up among the stars. The sun is made of “star stuff, and the earth is made of the same material, put together with a difference.” Astronomer Albert Durrant Watson in 1918 said in his address to the Royal Astronomical Society, It is true that a first thoughtful glimpse of the immeasurable universe is liable rather to discourage us with a sense of our own insignificance. But astronomy is wholesome even in this, and helps to clear the way to a realization that as our bodies are an integral part of the great physical universe, so through them are manifested laws and forces that take rank with the highest manifestation of Cosmic Being.

Thus we come to see that if our bodies are made of star-stuff— and there is nothing else, says the spectroscope, to make them of — the loftier qualities of our being are just as necessarily constituents of that universal substance out of which are made

“Whatever gods there be.”

We are made of universal and divine ingredients, and the study of the stars will not let us escape a wholesome and final knowledge of the fact. (Thanks to Quote Investigator for compiling all these quotes in one place.)

And so what? This image from Brian Andreas at Flying Edna reads, You are made of the

same stardust as all creation. Why would you believe that something so marvelous as that can’t be trusted to know how to live?

So much fear and doubt surrounds us and our world right now, the sudden shift in what can be known with certainty and depended on, and the lack of predictability in … well… life. Still, when we remember who and what we are, infinite expressions of life walking around in our physical bodies, there is something deep within us that cannot be damaged, hurt, or ruined, not matter what chaos seems to surround us.

We are stardust. How do you grab hold of that certainty and own it for yourself? How do you remind yourself when you forget? (Hint: daily spiritual practice helps.) Find your center. Get busy shining the stardust that you already are. The world needs your presence. Now…

Signup today for free and be the first to get notified on Center for Spiritual Living Tucson’s updates. We never share your information.