Concealing My Natural Bindi, No More

Over the past many months, not seeing people except on Zoom or wearing a mask when I did see someone in person, I stopped wearing any make-up. Now that I am starting to get out and show my face to others more, it was time to re-examined my make-up routine.

I have worn make-up to cover “flaws” and even out my complexion. Taking a good look at myself in the mirror, I noticed that the red patch between my eyebrows appeared more significant than before. It reminded me of the red dot Hindi women wear.

I did not know what it was called. An internet search led me to the following: 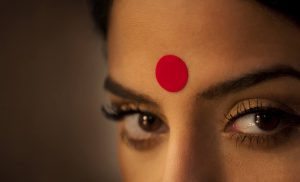 … one of the most internationally-known body adornments worn by Hindu and Jain women is the bindi, a red dot applied between the eyebrows on the forehead. … There are seven main chakras that run along the center of the body, and the sixth one (called the ajna chakra, the “brow chakra” or “third eye chakra”) occurs exactly where the bindi is placed.

In Sanskrit, ajna translates as “command” or “perceive,” and is considered the eye of intuition and intellect. … the bindi’s purpose is to enhance the powers of this chakra, specifically by facilitating one’s ability to access their inner wisdom or guru, allowing them to see the world and interpret things in a truthful, unbiased manner as well as forsake their ego and rid their false labels.

… The two physical eyes are used for seeing the external world, while the third focuses inward toward God. As such, the red dot signifies piety as well as serving as a constant reminder to keep God at the center of one’s thoughts. (The Purpose of the Bindi by Shuvi Jha June 5, 2018)

After reading that, I no longer saw my naturally occurring “bindi” as a flaw, something to be covered up. Maybe it’s a little more pronounced these days because my connection with my internal Guide is getting stronger. The inside is being reflected on the outside. I am listening to the internal voice more and allowing intuition to guide my actions. In fact, the intention I have been asking my fellow MasterMind group participants to hold for me is “Spirit Guides me. All is well.” My bindi is a visual reminder of this connection to Spirit. I will now proudly leave it exposed.