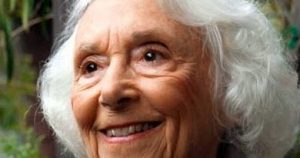 I first encountered Barbara Marx Hubbard, and the idea of the Universal Human, at Unity of Houston a whole bunch of years ago. Dr Michael Gott wasn’t there yet, and I remain forever grateful about that. If he had been part of that community, I can imagine feeling hard-pressed to leave Houston, and to move to the desert. Unity of Houston brought Barbara Marx Hubbard to town for a special series of workshops to introduce her new book Emergence, and to allow those of us who attended that day to arrange ourselves into home study groups.

So what is a Universal Human? As I said in my closing comments this past Sunday, A Universal Human is one who is connected through the heart to the whole of life, attuned to the deeper intelligence of nature, and called forth irresistibly by Spirit to creatively express his or her gifts in the evolution of the self that is a direct expression of Source. To become a Universal Human is to evolve consciously, choosing a path of development that has never been mapped before in a world that has never existed before. (p.4)

Is it attractive, or scary, to think that we might still be walking an uncharted path in uncharted territory? Probably both. And yet, are we ever really following in someone else’s footsteps if we are walking our own path?

This is new territory, an untraveled road. I look forward to considering this potential new world that we can choose to create together, a world that works for all, on Wednesdays starting next week, September 9th from 5:30-7pm at our Sunday zoom link.

If you wish to participate in the conversation, get a copy (or an e-copy) of Barbara Marx Hubbard’s Emergence, The Shift from Ego to Essence, 10 Steps to the Universal Human, and let’s go exploring. Reading through the foreword, introduction and first 32 pages ahead of time will be useful preparation for our first conversation.