In The Tree of Life, Everything is Interrelated

Last weekend, it was my turn to write the lead newsletter article, and for a double handful of ‘reasons’, Monday rolled around, and I hadn’t had the time or the available brainpower to create something. I wasn’t terribly happy about that, and it was the situation I found myself in. So when Marya Wheeler, who thought it was her turn to write, popped up in my e-mails with an article, I was absolutely thrilled. Obviously, we ran her article, and I gratefully breathed a sigh of relief. If you missed last week’s newsletter for any reason, and you want to read Marya’s article, Maria Schuchardt has already posted it on the blog on the website. If you haven’t seen our new website, please take a look. Mariann Moery worked extensively with our webmaster Graeme Hunt on it. The results are quite pleasing and inviting… and there’s always more that can be done, and will be done, eventually. 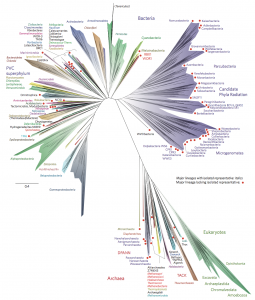 There are two related ideas that I’m going to meander around today. One, everything is interconnected, and two, the connections may not be visible unless you know where and how to look. This is not a unique feature of human civilization, but is actually implicit in all biological organisms, including us.

I’m going to geek out as a scientist for a minute. This image from Nature (Microbiology), published in 2016 shows a new phylogenetic tree, which visually represents the relatedness of all identified life forms on earth. Almost everything we tend to identify as ‘alive’ (plants, animals, fungi, even one-celled protists… every organism with defined nuclei and defined organelles) can be found in the pale green spiky bit at the bottom right corner. Most of the rest of the diagram, most of the rest of life on earth, is made up of simpler life forms without such internal structural definition.

So everything is automatically, inherently connected, because we all come from the same stuff, and are made of the same stuff. Another website showed the percentages of genes that humans share with each other (99.9+%) and with other life forms (chimps, 98%, mice, 92%, fruit flies, 44%, yeast, 26% and a weedy plant, about 18%). (Source: Koshland Science Museum).

Ok, I’m done being a science geek. So what? This week, I realized I had been thinking about a couple people that I hadn’t seen in a while, and they showed up at Sunday services. Who called who? I dunno. Doesn’t matter. Ernest Holmes wrote in The Science of Mind 77.2-3 “It is almost certain that between friends there is at all times a silent communication, a sort of unconscious mental conversation, going on.” No doubt, you’ve had the same thing happen for you. Friends you haven’t heard from in ages suddenly call, or write, and the first words that are said are something like, “I was just thinking about you!” What is that? Nothing more or less than the completely natural, profound and deep (unconscious) mental connection that always exists.

So why do I bring this up today? Some folks feel disturbed that Sunday attendance isn’t “what we think it should be.” Personally, I would love to see more people gathering on Sundays, because I acknowledge the intrinsic value gained by being regularly present in spiritual community. I also remember we are profoundly connected anyway, all the time. When someone chooses to intentionally gather, not out of duty or obligation, they express an intentional, personal decision to participate, engage and belong. I love that even more.