When I realized that I needed to completely recreate the Endings and Beginnings rituals, 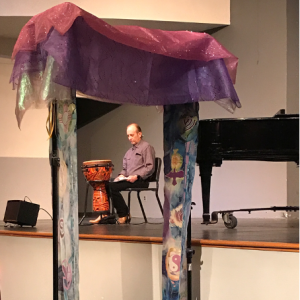 my heart sank. There was virtually nothing of our traditional ceremony I could salvage. I couldn’t even send participants the flash paper in the mail, because it’s considered an explosion hazard when dry, and useless for ‘flashing’ when wet.

The first part of the evening involves speaking the names of the family and friends who have departed from the earth plane this year.  That part is still workable, though we won’t be using a crystal bowl, or having people speak over the music. Online gatherings on zoom do have their constraints. 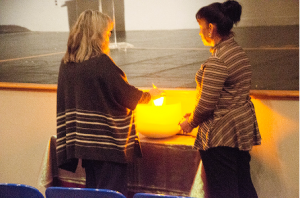 So I got to take a step back and think about the reason for the different practices used in the other two rituals. The Burning Bowl is all about releasing what we are done with/ready to let got of, and claiming the good that we desire to bring in to our lives.  Once I got clear about that, it was easier to imagine and create a way that our zoom participants could have a similar, though perhaps not as exciting, or picturesque as sticking a piece of flash paper in a lit candle and watching it flare up.

Then the third part of the ceremony, crossing the threshold is about challenging ourselves to be honest with ourselves about what we want, and are willing to intend, 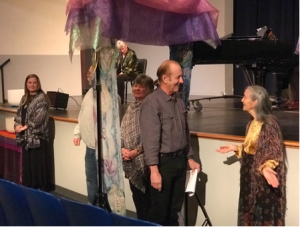 and attend to, and taking a look at the doubts, second thoughts and fears we have about moving in the direction of our dreams. There’s nothing special about the threshold we created year-after-year in the auditorium at the Gregory. It’s a doorway. Everybody’s got doorways in their houses. Ours was decorated, but there’s nothing to stop people from decorating a doorway at their own house, if they choose.

One of the benefits of having the service online, is that there will be more music, songs that we mostly know and can sing along with David. Shelly’s going to help me with a part of the ritual, and I won’t be talking as much.

Thanks to Mariann Moery for most of the photos used in the post.  They were taken at last year’s Endings and Beginnings ceremony.  I had to go all the way back to 2017 for the photo of the flame at the burning bowl. Jon Lopez, who moved to Green Valley with his partner Grey, and affiliated with the Sonoran Desert CSL, took that photo.  Plan to join us Thursday evening!