Coming home from my walk I see a man in a black SUV parked in front of my house. I know exactly what he is doing. He has been called by the hollyhocks. I am surprised by his stopping because the flowers have not begun to bloom, but the leaves are a big beautiful green and there are a lot of them clustered together. Hollyhocks take two years to grow into plants that bloom. They are also independent, hearty plants that do not need to be covered when it frosts, nor do they need to be watered.

Still curious about his stopping, I say, “You look in deep contemplation.”

“Are those squash plants? I’m putting a planter in my friend’s backyard and am looking for some vegetables to plant.” I tell him the plants are hollyhocks. We chat a bit, then he pulls out his phone and wants to show me pictures of the work he has done. We are still in the middle of the street. I suggest he puts his car in park, and he does. He shows me the photos and where he is working a street to the north. In the photos I notice beautiful iron work on the wall where he is putting in the planting beds. When he says they have similar ironwork on the wall around the front of their house, the one with the pontoon boat, I know exactly which house he is talking about. It’s a beautiful yard, with two big Mesquite trees with flowers around the base of the trees. We marvel about the trees together. I learn his name is Hector, and Joe is the friend he is helping out. “What’s his wife’s name?” I ask. He closes his eyes and thinks about it, then remembers “Judy. Joe and Judy.” In my daily walks around the neighborhood, I have greeted Joe, now I can do it with his name.

Hector tells me of his arthritic hands, the cancer that is remission and about his kayaking and upcoming 77th birthday. But mostly he tells me about the importance of staying busy.

I tell him he must come by when the hollyhocks are in bloom, he assures me he will.

During the time we had our conversation in the middle of the street, no cars came by. It was a scared time of communion and grace. 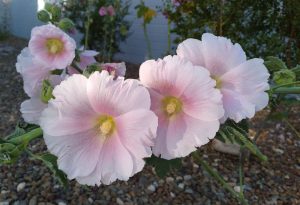